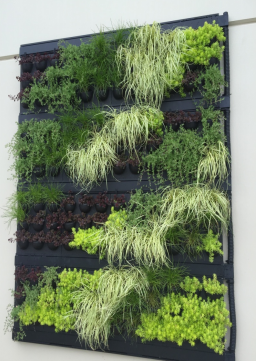 This trial was conducted by Nerida’s Interior Plantscaping, in conjuction with The Container Connection.

The five plant varieties were chosen with the full sun position in mind. The plants generally did well
considering the extreme, north facing location with full sun. I noticed the black cassettes got quite hot and
was worried that the water reservoirs would also heat up and damage the roots that had grown down into
them. Despite this the plants coped well.

Due to the small area the plants are planted into, 7cm tubestock was used. Even with almost a couple of
months to become established before installation, the design looked a little incomplete. Establishing the
plants for 3 months would create more impact for installation.

Plant varieties and how they performed listed below;

1. Dwarf Pig face mesembryantheumum – established quickly & is still going strong and added some
interest when flowering. Nice hanging habit. A recommended variety for this greenwall system and an
extreme location.
2. Lomandra confertifolia – seemed to take a while to get established with a couple needing replacing not
long after installation. All are now doing well, the only sign of stress being some browning on the ends
of leaves. Another recommended variety.
3. Carex oshimensis ‘Evergold’ – established quickly & did well overall. Some browning off has recently
occurred and will need cleaning up but new growth is coming through. The spilling habit and green
foliage with a bright yellow streak make this plant an attractive addition.
4. Sedum ‘Dragon’s Blood’ – was selected for its distinctive burgundy foliage but failed to take off. It never
covered up the cassette despite surviving right up until a couple of months ago. Now having mostly died
off, this variety is NOT RECOMMENDED for this greenwall system.
5. Sedum ‘Gold Mound’ – did really well covering up the cassette quickly in a tight clump. A couple of these
plants have now died off but generally still doing well. I think this variety would also work in part shade.

I would definitely use this system again, although for a location like this I would not install again without an
automatic watering system. I found the greenwall needed watering every couple of days over the summer
months. I think the plants may do better with more consistent watering that could be achieved with an automated
system.

Regular feeding with a liquid fertilizer was required to keep plants looking good. I also regularly added a
seaweed solution to help with any stress. When putting together the original design I went with a diagonal pattern. Next time I would put the plants in patches that would make changing one of the panel’s work without messing up the design.

To ‘freshen up’ this greenwall I plan to replace all of the sedum ‘dragon’s blood’ with a hardy flowering
groundcover such as Veronica penduncularis or Erigeron glaucus by planting directly into the cassettes
without removing them. If this isn’t successful perhaps some new cassettes will be needed to start over.